The rats have killed me ten times.

I desperately want to kill things with knives, but throwing knives aren't very useful against demon pigs and skeleton knights.

Hollowed shells of the dead swarm me when I enter hallways and I die, only to be reborn as one myself. I try again and fall off a bridge and am crushed by the demon pig.

After much struggle I decided it was perfectly OK to just run through the level to the next bonfire.

I've been staring a lot at the character model and I've decided I should've made 'em less slim. Oh well.

I wasn't sure where to go at this point. This whole idea was kind of half-assed in the first place.

After a quick flip through the list of enemies on the Dark Souls wiki I decide my goal is to be killed by a Burrowing Rockworm in the Demon Ruins.

I was particularly excited to run into Frère André this run, who is of course Godot. 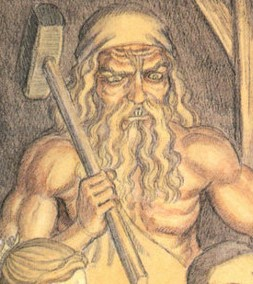 Godot was excited to see me. I upgraded the short sword once and bought a bunch of bolts for the crossbow. Or, I thought I did. I actually forgot to buy them.

I'd had a nagging thought for a while. Godot dies in the anime - so I wasn't sure if I would have to take him out myself at some point. Rather than worry about this, I figured he should just die now.

He's fast and got a mean left hook. He taps me once and I can't get away, his arm is at once both a cannon and an automatic rifle.

Every so often Godot will jump forward and slam me with a standing dropkick, killing me instantly.

I stab Godot in the back eight times and throw six knives at him. He calls me a backstabber and dies.

I take his crest and continue on.

I run into Bazuso and figure if Godot should die then Bazuso definitely should.